By Dan Ambrose: Luis Ortiz is coming into his fight against former unified heavyweight champion Andy Ruiz Jr an underdog for their headliner on Sunday night on FOX Sports PPV at the Crypto Arena in Los Angeles. If Ruiz loses this fight, his career will be meteor dust.

Ortiz is clearly a better fighter than Arreola, and you can only imagine the damage he can do if he lands his uppercuts and powerful left hand shots on the chin of Ruiz.

‘The Destroyer’ Ruiz, 32, feels that he has his weight at the optimal level for this fight, but it might not make a difference. When Ruiz lost to Joseph Parker in 2016, he was at the perfect weight, and yet he still lost the fight.

“I need to break him down and then eat him up in the later rounds,” said Andy Ruiz Jr to Fight Hub TV about his plans for beating Luis Ortiz.

“Every punch is different,” said Ruiz when told that his dad questions Ortiz’s chin. “We take punches; it’s hard. All punches hurt. Even when Chris Arreola hit me in the head and the chin. They all hurt. It’s how you receive it and get back up to win that fight.

“No, because of the knee surgery I had as well. Not a lot of people knew that I had to get knee surgery, and I took a little time out. Maybe longer than usual because I was enjoying the family,” said Andy Ruiz about whether his frequent inactivity has hurt his career.

“I work so hard to get to this point; taking a year off is not going to hurt. As long as you train hard and you bust your a** off. That’s why we had a long training camp for this fight because I’m not underestimating anybody no more.

“Everybody is pushing me to the limit. I feel like I should have done this a long time ago, especially opening up my own gym. I feel like I could have been more disciplined and more dedicated to the sport. I’m still young. The future is super bright. I just got to work hard,” said Ruiz. 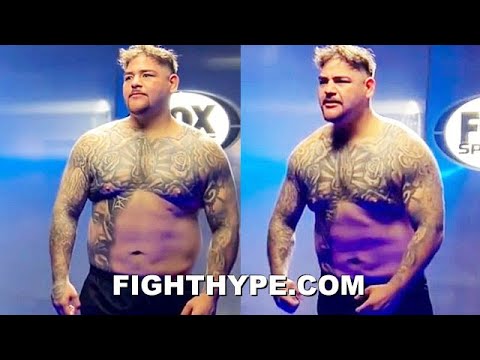