By Chris Williams: Shakur Stevenson blames missing weight on Thursday due to his body being unable to cut down to 130 any longer for what would have been a title defense of his WBC & WBO super featherweight titles against Robson Conceicao.

During Thursday’s weigh-in, Stevenson weighed in at 131.6 lbs and, surprisingly, didn’t choose to use the two hours that he had to take the 1.6 lbs off to make weight.

Shakur said that his “health comes first,” so he wasn’t going to risk it for this fight. It’s not surprising that Stevenson didn’t want to drain himself for a fight against the talented Conceicao because it’s going to be a tough enough fight as it is.

Shakur, 25, says, “I’m moving up to 135” to take on the big names in that division. It doesn’t make sense for Stevenson to stay at 130 because he beat the only two big names in Oscar Valdez and Jamel Herring.

If Stevenson were to stay at super featherweight, he would have lesser fights against Joe Cordina, and that’s not a match that U.S boxing fans would be interested in watching.

I gave it my all. I’ve been professional my whole career and made weight, but my body just can’t make 130 anymore. My health has to come first. I’m moving up to 135 in my next fight.

Stevenson looked a little intimidated during the final face-off with the 2016 Olympic gold medalist Conceicao, and you can understand why. Conceicao should still be undefeated after getting the short end of the stick in a questionable 12-round decision against Oscar Valdez last September.

During the face-off, the normally confident Stevenson looked nervous while being stared down by the 33-year-old Brazilian Conceicao. Given what Conceicao did against Valdez, you can understand Shakur’s nervousness.

For Stevenson’s sake, he’d better hope that he’s not weight drained for this fight because Conceicao has the size advantage over him to give him a lot of trouble for as long as this fight lasts.

Moving up to 135 will immediately put Stevenson in a position to challenge the winner of the October 15th rematch between undisputed lightweight champion Devin Haney and George Kambosos Jr.

Top Rank promotes Haney, so it would be an option for them to match Stevenson against him if they don’t use Vasyl Lomachenko for that spot. 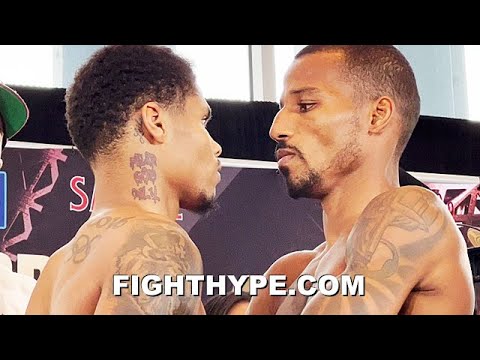 Castrol Save of the Month