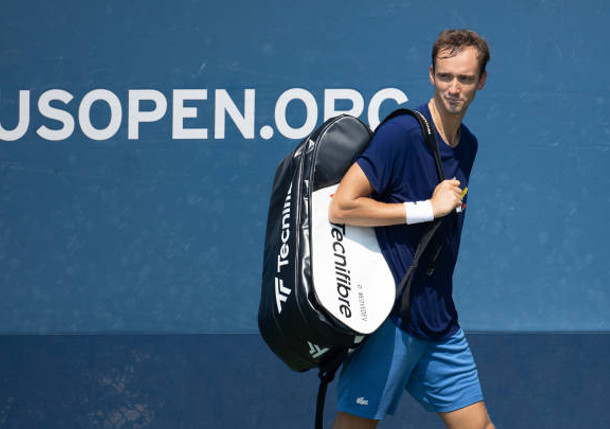 The truth hurts and heals.

No one knows that better than Daniil Medvedev in New York.

Medvedev’s love-hate relationship with US Open fans is one of the most compelling and human factors in his rise to world No. 1.

The world No. 1 launches his US Open title defense against American Stefan Kozlov at noon on Monday admittedly unsure of the reception he’ll receive from Arthur Ashe Stadium fans.

“I feel like, yeah, in New York I have a special relationship with the crowd,” Medvedev told the media. “I have no idea how it’s going to go this year, but I’m happy to be here and happy to experience whatever’s going to happen.”


Embracing the role of anti-hero, Medvedev upstaged all comers in a stirring run to the 2019 US Open final that saw him openly feud with the tough New York City crowd even taunting fans at times.

The quirky Medvedev’s candor, combativeness and drive helped him repair the relationship with Arthur Ashe Stadium fans. Medvedev turned jeers to cheer. His courage pushing Rafael Nadal to five dizzying sets before falling prompted the 23,000 fans in attendance to salute the Russian with a sustained roar for his sheer defiance and guts after that 2019 final.

“When I look back at US Open nights, every night starting 2019 where I got booed for a reason, it was not like there was no reason,” Medvedev said. “All these moments, and especially the final against Rafa, give me goose bumps because it was something special when I’m never going to forget, my team will never forget.

“They suffered also because of my actions. They loved what happened in the end.” The good vibes and crowd support carried over into Medvedev’s surge to the 2021 US Open final where he deconstructed Novak Djokovic 4, 4 and 4 to snap the Serbian’s 27-match Grand Slam winning streak, deny his calendar Grand Slam dream and win his maiden major.

How will fans respond to Medvedev as defending champion particularly if he runs into Wimbledon finalist Nick Kyrgios in the US Open fourth round?

Medvedev’s main mission of course is to try to defend his title. The man who once called out Stefanos Tsitsipas on court after a match in Miami, says he will keep it real with the fans.

“When we talk about reception, I always say I just want to be myself and see what people think of me,” Medvedev said. “Even sometimes it’s not good. Sometimes it doesn’t please me, but I never want to do something fake.

“I mean, I don’t think it’s not that tough to, what we can say, to try to please the crowd every time you talk to them. You know you can just actually every time you have the mic just say in every city in the world, Oh, my God, I love this city. But I want to be try to be open-minded to people and just tell the truth all the time.”

That raw candor has won Medvedev many fans in New York, which has boasts large Russian and Belarusian communities in Brooklyn.

Hall of Famer John McEnroe has called Medvedev “a chess master” and “one of my favorite players to watch.”


Asked to assess Medvedev’s level ahead of the US Open title defense, McEnroe told Tennis Now he’s intrigued to see how the top seed responds to challenges both on and off court.

“You wonder what’s going on in his head, obviously, with what’s going on with that war,” McEnroe told Tennis Now in an ESPN Zoom call to promote the network’s US Open coverage starting on Monday at noon. “So, I can’t imagine it’s not playing a part in all these Russian players and what’s going on in that part of the world.

“Having said that, I still think he’s one of the favorites, one of the top two couple guys, no question about it. So that’s obviously an interesting storyline to follow. And tactically there’s a whole other thing. Obviously he plays so far back. It seems like that will catch up to him…they’ll figure out, players should figure out a way to deal with that and he’s got to adjust. We’ll see if that adjustment is made or if it needs to be made.”