By Craig Daly: Vasyl Lomachenko suspects that Gennadiy Golovkin fought Canelo Alvarez with a “health” problem with his right hand last Saturday night because he ONLY used his left hand throughout the 12-round bout at the T-Mobile Arena in Las Vegas.

In the championship rounds, Golovkin appeared to be using just his left hand for his power shots. Occasionally, Golovkin would throw a right, but it wasn’t like how he normally fights.

Golovkin has always been a big right hand puncher, but he failed to utilize this dangerous weapon against Canelo for some reason, which could suggest that he was injured.

Without his primary weapon, Golokin had no chance against the undisputed super middleweight champion Canelo because he wasn’t going to beat him with a jab or by throwing left hooks.

Although Golovkin did appear to stun Canelo with a left in the ninth, he couldn’t follow up to try and finish him off because he wasn’t using his right hand.

“It was a very interesting fight, but I think GGG has a problem with his health, because he only worked all during the fight with his left hand” said Vasyl Lomachenko to K.O. Artist Sports following Gennadiy Golovkin’s loss to Canelo Alvarez last Saturday.

Lomachenko could be correct about Golovkin having a hand injury. Why else wouldn’t he have used that hand during the fight?

After this performance, Lomachenko said that Golovkin could “retire” from the sport. He doesn’t know what Golovkin can do, but if this is the way he’s going to fight in the future, hanging up the gloves might be a wise thing to do.

“Look, I don’t know; nobody knows. It’s boxing,” said Lomachenko when asked if he expected more from Golovkin. “Before the fight, you think about the strategy of fighters, but during a fight, it all changes; it all happens.

“It’ll be very interesting,” said Lomachenko when asked about a rematch between Canelo and WBA light heavyweight champion Dmitry Bivol. “I think Canelo needs this.” 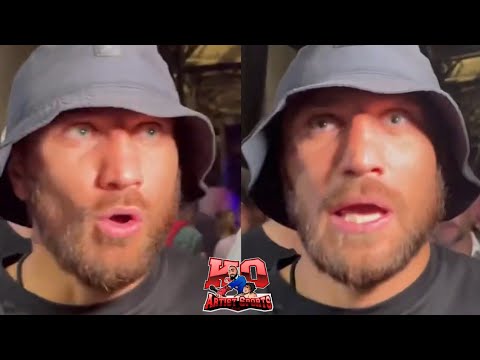