Liam Smith Vs. Hassan Mwakinyo How To Watch
Boxing

Liam Smith Vs. Hassan Mwakinyo How To Watch

By Barry Holbrook: Former WBO 154-lb champion Liam Smith returns to the ring tonight to face hard puncher Hassan Mwakinyo at the Echo Arena in Liverpool. The fight will be shown on Sky Sports.

Hassan (20-2, 14 KOs) comes into tonight’s contest with a 10-fight winning streak. The most notable names among those ten are Julius Indongo and Sam Eggington.

Although Smith (31-3-1, 18 KOs) has sparred Mwakinyo before, it was a while ago, and he’s improved as a fighter. Additionally, Smith is older at 34, and as he showed in his recent war with Jessie Vargas last April, he’s easy to hit.

Even if Smith does win tonight, that title shot against Charlo is likely two years off unless he beats someone highly ranked like WBC interim champion Sebastian Fundora. That’s the guy Smith needs to fight if he wants a quick crack at a title before he ages out.

Tonight, Smith will be fighting at home in Liverpool, so he should raise his game over his last messy performance against Vargas.

Smith’s promoter Ben Shalom says he could go up to middleweight to challenge WBO 160lb champion Janibek Alimkhanuly. That would be a tough fight for Smith, as Janibek is a huge puncher, and he’s younger than him at 29. But if Smith wants a quick title shot, Janibek is the way to go.

“I don’t think Janibek is a fight he would avoid,” Ben Shalom said to Sky Sports about Liam Smith. “Liam wouldn’t turn down any fight, especially for a world title; Janibek is probably the most avoided fighter in the world at the moment, genuinely.

“Everyone’s trying to jump out of the way of that one. Eubank could have taken it for a world title, [Demetrius] Andrade’s moving around.

“It’s one that genuine middleweights don’t want, but Liam Smith is, as I said, a world-class operator, and he would look at any fight with confidence. He’s going to have options.”

“The fights on after the weigh-in, and that’s when it becomes real. I’m not going to tell the people about the story, but I thought I’d give him a little reminder about what happened the last time we were in the ring,” said Liam Smith to Sky Sports about his previous sparring with Hassan.

“Obviously, the fans always turn out, and I’m humbled and grateful all the time. Every time I’ve fought here, I’m been able to repay them with a win. On Saturday, it’s going to be no different. I think you’ll get the best of me. You’ll see on Saturday night how I’ve prepared for it,” said Smith. 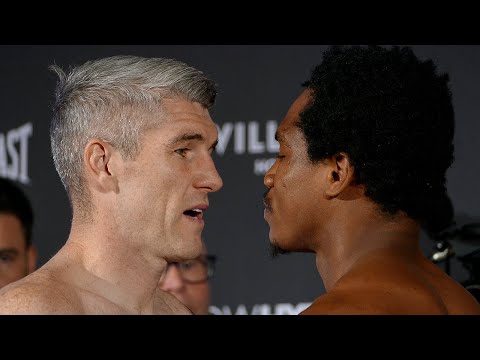 Kyrgios to Meet Medvedev in US Open Fourth Round