By Huck Allen: Gennadiy Golovkin disagrees with Matchroom Boxing, who he says views him as the underdog going into Saturday’s trilogy fight with Canelo Alvarez at the T-Mobile Arena in Las Vegas.

If that’s to be the case, Golovkin will need to make it more conclusive than the two previous fights against Canelo.

It’s understandable why Matchroom promoter Eddie Hearn views Golovkin as the underdog because that’s how the oddsmakers have it, and he hasn’t kept himself busy as much as Canelo.

Moreover, the opposition Golovkin has faced hasn’t measured up to the guys that Canelo has been beating one after another in the last four years. Canelo is younger, faster, more active, and has fought better competition since 2018 than Golovkin.

“You stay in boxing when you’re still in demand. When there are offers for fights, of course,” said Gennadiy Golovkin on Wednesday to the media when asked if he’s retiring. “If a fourth fight [with Canelo] is offered, I would say, ‘Why not?’ If people want it. I retired three years ago. Right now, I am staying here.”

If Golovkin doesn’t retire, boxing fans would like to see him fight David Benavidez and/or Jermall Charlo. Canelo hasn’t shown much desire to fight those guys.

“You talk to Matchroom too much. They think I’m an underdog. I don’t think that way,” said Golovkin. “I believe in myself, I feel great, and I’m ready for the fight. Please stop talking to Eddie Hearn about the fight.

“It’s a compelling fight for a lot of different reasons. One, Canelo Alvarez is coming off a defeat, and he’s got a lot to prove in this fight. Two, Gennadiy Golovkin is probably at the final roll of the dice to become undisputed, something he’s always dreamed of doing,” said Hearn to iFL TV.

“The first two fights were tremendous fights, but I feel we’re going to get the best one. Gennadiy Golovkin shared 24 rounds with Canelo Alvarez. Some people believe he won those fights. He knows how to fight Canelo Alvarez.

“I think at 168, it’s going to give him a much better shot than at 160 because making championship weight for 16 years, it’s going to really help his engine, help his durability, and they’ve both got granite chins,” said Hearn. 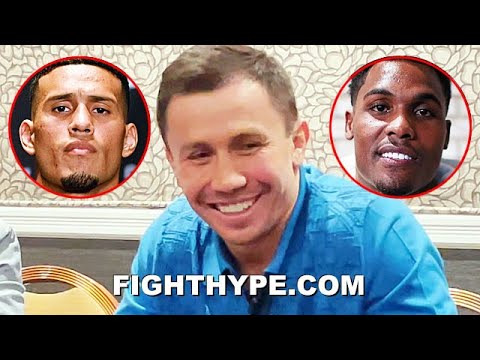