Gennadiy Golovkin Believes He Can Beat Canelo By A Decision
Boxing

Gennadiy Golovkin Believes He Can Beat Canelo By A Decision

By Sean Jones: Gennadiy Golovkin thinks he’s got a good chance of beating Canelo Alvarez on September 17th, provided the judges are unbiased and professional for their trilogy match.

The 40-year-old Golovkin (42-1-1, 37 KOs) feels that his age will work in his favor because he has the experience and the maturity to defeat the favorite Canelo (57-2-2, 39 KOs) to rip away his undisputed super middleweight championship in their fight at 168.

Golovkin says he’ll be ready to fight whatever way that Canelo wants to on September 17th at the T-Mobile Arena in Las Vegas.

If Canelo plans on fighting on the inside, Golovkin will battle him there, and if he chooses to take it to the outside, he’ll accommodate him there as well.

It would be better if Golovkin chose to follow the blueprint created by Dmitry Bivol because he showed that Canelo is basically helpless when his opponents are throwing combinations, which he has no defense for, and he can’t match that style due to his poor stamina.

Golovkin has already tried to knock out Canelo in their first two fights, and he’s failed at that task. For the third fight, he should focus on boxing him and hope the judges don’t rob him in Las Vegas.

“I feel better than usual. I feel calm, comfortable, and I don’t feel any stress,” said Gennadiy Golovkin to Teddy Atlas’ The Fight. “Of course, I have my plans, my strategy, but it’s not just one boxer who decides how a fight will play out.

“We will be ready for everything, and he will see everything in this fight. Perhaps you may even see a knockout.

“It’s difficult to compare the two coaches. We cannot compare the first two fights with the third fight because so much time has passed, and we are now in a different time.

“I don’t want to belittle any of my coaches. I can only say that it’s not very important what the coach does during the fight. How he acts during the fight, and what strategy that is selected. But the entire approach to the training camp.

“For example, the approach during the three months of training, and what it includes. With GB [Johnathon Banks], we are trying a lot of new things. There’s constant evolution in boxing and the approach to training. We work with a conditioning trainer and a nutritionist.

“It’s the overall approach and the attention to the details. Yes, I feel more mature. Maybe it’s due to my age and my experience of the fights that I had in my career.

“I worked with specialists, who are part of my team on a number of areas, and I learned a lot about myself, and I feel very comfortable now,” said Golovkin.

“Your first two fights with Canelo, Gennadiy, they were at middleweight. This fight is at super middleweight, 168 pounds.

“I would say there are not any global changes to the approach because the difference is not big,” said Golovkin. “It’s pretty much the same fight weight whether it’s 160 or 168. It’s just how you approach on how to lose weight.

“Gennadiy, obviously, we understand that Canelo has gotten better treatment from the judges than you have,” said Atlas. “I always talk about from a trainer’s perspective that 75% of this business is mental.

“Does that fact have any mental effect on you at all during your training camp, knowing you might have to do a little bit more to win and get a decision than he has to do?” said Atlas.

“I don’t think I will need to do a little bit more in this fight,” said Golovkin. “I really hope that the judges, who are professionals, will judge this fight in the actual sport of boxing.

“They look at clean shots, they look at the number of shots, and we realize that all people have their sympathies. But I do hope this component will have the least role and the judges will do their best for the job that they are assigned to,” said Golovkin.

“Yes, I hope so too, and we all hope so,” said Atlas. “I had to ask the question because that’s the right question to ask as the fans wanted to hear that.

“With all your experience and your championship background, I didn’t expect that in any way to change what you got to do, but it can be in hour mind. It can be in anyone’s mind.

“Did you watch the Canelo-Bivol fight? I know you know what you have to do, obviously. You fought Canelo twice. Is there anything from that fight that you saw that you believe can help you in your fight with Canelo? said Atlas.

“I still have not watched the full fight,” said Golovkin about Canelo’s loss to Dmitry Bivol on May 7th. “I’ve just watched the highlights, and to me, it doesn’t make sense to watch the full fight because I didn’t like how Canelo looked during that fight.

“I don’t want to belittle Bivol’s performance during this fight, don’t get me wrong. Dmitry Bivol deserved this victory. He won. I just want to say Canelo did not look his best, and he did not show what he’s capable of probably because his attitude was different during this fight.

“I’m certain he’ll be a different fighter during our fight. Speaking about the judges’ decisions. 115-113, very close, like it was a close fight. I don’t think it was fair.

“I don’t think so.  I don’t know what the reason was for that. Whether the judges could not believe that Canelo could lose, but that fight demonstrated that Canelo is not unbeatable, that he can be beaten.

“I really hope the judges will judge our fight without any bias and be as reasonable as possible. It will be a clear, unbiased performance by the judges,” said Golovkin.

“I agree. I hope so too; we all hope so, but we have seen favoritism and bias towards Canelo in the past,” said Atlas. “I just wish that I could be sure that it’s not going to show, but again, that’s not his job.

“His job is to get in the ring and do what he has to do to win the fight. . A lot of people will look at 40 years of age, which you are now as a negative.

“I want to ask you, Gennadiy, is there actually do better now, and I’m very serious, that you’re better now at the age of 40? With all the experience that you’ve been through and the maturity, you talked about.

“Is something in Gennadiy Golovkin, at the age of 40, is there something that you are improved with, better with?” said Atlas.

“I’ve been a middleweight champion for over 12 years, and I hold several belts,” said Golovkin. “I have everything. I have experience, I have my age, I have my power, so when I come out and when I get in the ring, I have nothing to prove to anybody.

“God only knows what will happen in the fight, but I feel very comfortable that I can get in thee ring and box. I feel better than when I was 30 years old because back then, I was still chasing some records, and, for example, scoring a knockout was on my mind.

“Now, I have all this baggage with my career and my experience that I’m bringing with me that I can use,” said Golovkin. 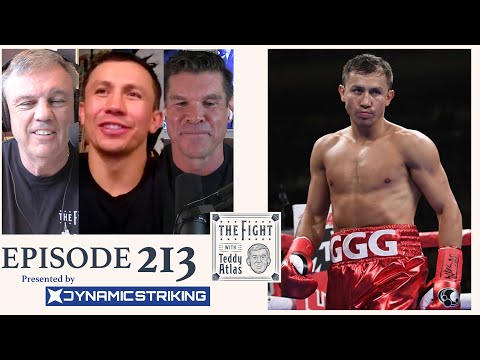