Federer’s Final Outfit on Display at Hall of Fame 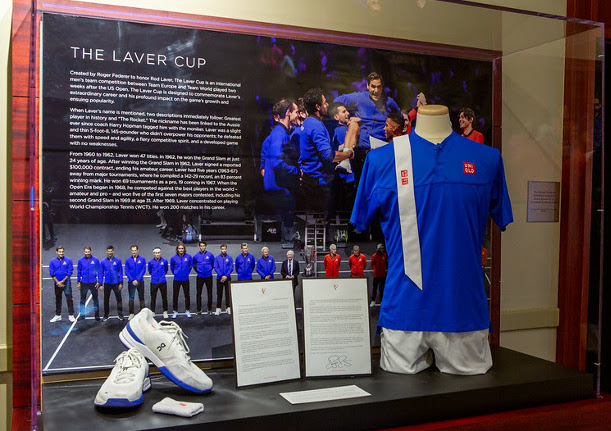 The holiday season just got even more peRFect in Newport.

The International Tennis Hall of Fame is celebrating Roger Federer’s career with an exhibit devoted to Federer’s farewell match.

Federer has loaned his Uniqlo apparel and On tennis shoes from his final professional match to the Newport, Rhode Island-based Hall of Fame.

The outfit, worn by Federer in September at the 2022 Laver Cup, is now on display in the museum, alongside a signed copy of his retirement announcement letter.

As part of the ITHF’s Laver Cup exhibit, the items now sit adjacent to several other Federer contributions to the museum, including a hologram experience that bears his likeness.

“This addition to the International Tennis Hall of Fame is a fitting tribute to the final chapter in a defining career,” said Todd Martin, CEO of the ITHF. “We are tremendously grateful to Roger for this generous loan, and for valuing our mission to preserve tennis history as it happens. The ITHF congratulates Roger on all his achievements, the example he has set for everyone in the sport, and for his dedication to the sport’s history. We know this exhibit will inspire countless fans and visitors.”

Federer returned to the ATP Tour for the first time since 2021 at the Laver Cup in September of this year. Prior to the event, he announced through a heartfelt open letter that it would be his last, closing on of the greatest tennis careers in history. In his final match, Federer played doubles with Rafael Nadal and lost to Jack Sock and Frances Tiafoe 6–4, 6–7(2–7), 9–11. Team World went on to win the event for the first time in its five-year history.

The Laver Cup was created by Federer and his management group TEAM8 to honor Hall of Famer Rod Laver. Inspired by golf’s Ryder Cup, the annual event is an international men’s team competition between Team Europe and Team World, played two weeks after the US Open.

The Laver Cup is designed to commemorate Laver’s extraordinary career and his profound impact on the game’s growth and ensuing popularity.

Federer’s illustrious career began in 1998 when he debuted as a wildcard in the Rado Open in Gstaad. In the two decades following, he ascended to the game’s highest heights, and is widely regarded as one of the greatest players of all time.

Federer was the first man to win 20 Grand Slam singles titles in his career, including a record eight Wimbledon championships, six Australian Open titles, five US Open titles, and the 2009 French Open. He finished his career with 103 ATP singles titles, the second-most all-time, and sat atop the world rankings for 310 weeks.

Visitors can plan their trip to view these items and experience the museum at www.tennisfame.com/museum-and-grounds.

IPL 2023 Auction: Complete list of players to go under the hammer and their base price

I can now spend more time with my

I can now spend more time with my

“I Don’t Want to Be a One-Hit Wonder”