By Sean Jones: Dmitry Bivol says Canelo Alvarez should want a rematch after losing to him last May. WBA light heavyweight champion Bivol (21-0, 10 KOs) says he doesn’t know what Canelo will do, but he plans on containing to win and capture world titles at 175.

Canelo originally said he would fight an immediate rematch with Bivol, but he quickly changed his mind, choosing to fight the depleted-looking 40-year-old Gennadiy Golovkin on September 17th.

Now, Canelo is saying that if Bivol loses his title defense against his WBA mandatory challenger Gilberto ‘Zurdo’ Ramirez on November 5th, then he won’t get the rematch.

With the way Canelo keeps coming up with obstacles for the rematch with Bivol, it’s easy to predict that he’ll come up with a new excuse for not fighting him again after he makes easy work of the glacially slow Zurdo Ramirez (44-0, 30 KOs).

Canelo SHOULD want the rematch with Bivol, as his boxing fans are expecting him to attempt to avenge the loss.

Unfortunately, the way Canelo keeps setting barriers for the rematch, it’s safe to say that he’s NOT going to fight Bivol again. When you’ve been schooled as bad as Canelo was by Bivol, the last thing you want is to get back in the ring with him again to get a second helping of whoop a**.

“I don’t know what he wants after his fight and my fight,” said Dmitry Bivol to iFL TV when asked if Canelo Alvarez would trigger the rematch clause for a second fight with him.

“Every time I have a date for a fight, I’m focused on my fight. If I focus on Canelo now, it will not help me in my fight. I have to think about Zurdo on November 5th, and then we will see.

“I love challenges. I think every champion loves challenges. Rematches are a real challenge for him and for me too. I think he should want [a rematch].”

“I think better fight Canelo against Joshua,” said Bivol when told that Canelo is still interested in fighting Oleksandr Usyk. “It would be better much more.

“I’m happy I did it, but in my mind, I just did my job,” said Bivol about his win over Canelo. “Of course, I got more Mexican boxing fans, and I’m glad. I had to do it.

“Why not? He’s in my division. Every fighter in my division could be my opponent, maybe in my next fight,” said Bivol when asked if he’d be interested in defending against Joshua Buatsi one of these days.

“We will see. This is professional boxing. When you can create plans with me and Buatsi, and the WBA just ruined his plan. I’m just focused on my fight.

“Of course, I want to fight for another belt. I’m not waiting for their fight,” said Bivol about the Artur Beterbiev vs. Anthony Yarde match. But in my head, someone in my weight class with a belt, I want to fight him.

“Of course, it changed [Bivol’s life after beating Canelo]. I got more attention for my person. When I came to Kyrgyzstan, a lot of people came to my training camp and wanted to make a photo.

The president of Kyrgyzstan invite me, and people know me much more than before the fight. Of course, I’m still hungry, and I want more belts. My goal. Of course, I want more.

“I wanted more fight against Zurdo [rather than Joshua Buatsi]. It’s a good fight, and I would be glad to fight him. But when the WBA changed, it’s more better, I think, because I wanted to fight him [Ramirez] a couple of years ago since 2017.

“He was a champion at super middleweight, and he has much more experience than Buatsi. Maybe he’s taller, and I knew him and people knew him much more in America than Buatsi.

“Of course, fighting in the U.S, more people know about this fight. Bring the fight to Abu Dhabi in the United Arab Emirates is great too. 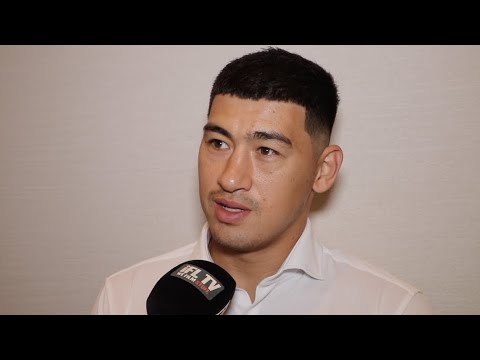