By Allan Fox: Devin Haney took a shot at Gervonta ‘Tank’ Davis for his “cop out” excuse for not fighting him by saying that he makes “5x” more money.

Undisputed lightweight champion Haney (28-0, 15 KOs) believes Tank (27-0, 25 KOs) was just looking for any excuse to avoid having to fight him.

If WBA ‘regular’ lightweight champion Gervonta really wanted the fight with Haney, he could easily make it happen by asking World boxing Association president Gilberto Mendoza to make him the mandatory for his WBA belt, which according to Devin is the “real” one with that sanctioning body.

Haney has a title defense against former champion George Kambosos Jr. next month on October 15th at the Rod Laver Arena in Melbourne, Australia.

Assuming everything goes well, Haney will be looking for a big name. It’s going to look bad on Tank’s part if he chooses to reject the offer from Haney.

“I never said I wanted the Mickey Mouse belt [WBA ‘regular]. He can drop the belt,” said Devin Haney to Fighthype about Gervonta ‘Tank’ Davis.

“They’re [WBA] going to drop the belt anyway. The WBA isn’t going to hold the regular champions. They’re getting ready to drop the belt. So, he [Tank Davis] can come challenge me for my WBA belt or whatever.

“If he really wants the fight, he can get the fight. All he has to do is tell [WBA president] Gilberto [Mendoza], ‘Hey, I’m dropping this belt. I want to fight for the real belt,’ and the fight can be made.

“My main focus is George Kambosos. Once we’re victorious, we can talk about what’s next. That’s nuts. What is he saying, he’s making $25 million a fight?” said Haney in reacting to Gervonta saying he’s making five times more money than him.

“Everybody knows that’s cap. If he was making 25 million a fight, it would show. He hasn’t gotten nothing better than me. Everything he’s got, I got. Nobody believes that anyway. That was just a cop-out to deflect people from saying, ‘Why don’t you fight him?’ He wanted to run his money route.

“I can understand why he wants to fight Tank. He wants to get some get back,” said Haney about Isaac ‘Pitbull’ Cruz. “He wants to redeem himself.” 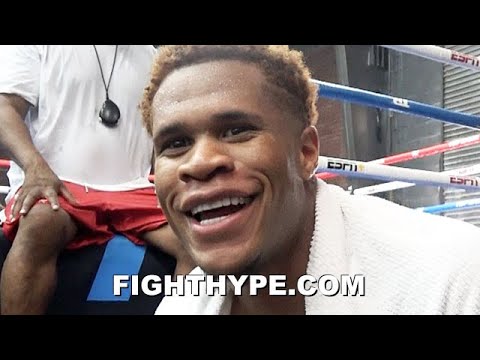