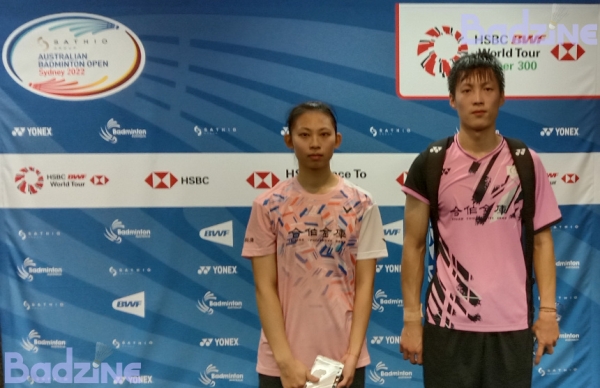 Mixed doubles unfolded from 4PM on all four courts with one half of both the Tokyo Olympic gold medallists in mixed and men’s doubles emerging into the next round.

Leave it to the professionals

It was a stroke of serendipitous planning that Poon Loke Yan / Nipitphon Phuangphuapet were scheduled as the last match of Day 1. The Australian crowd were roused to a frenzy by their adopted former Hong Kong and Thai internationals, now based in Sydney, battling Gloria Emanuelle Widjaja / Dejan Ferdinansyah and unfortunately coming off second best 13-21, 20-22.

Poon/Phuangphuapet had opportunities to claim the second game but gave up the upper hand care of the Thai’s unforced error on return on serve and then Poon’s service error at the critical deuce stage.

The young and bouncy Ferdinansyah rained down powerful smashes which were still manageable more than half the time come the second game. His offense still needed the assistance of Widjaja to produce the ultimate put away.

An unrushed Poon held her own in the rear court for significant periods in multiple rallies, with neither opponent judging it wise to dash forward and intercept – a poise reminiscent of other mixed doubles luminaries like Eom Hye Won, Kim Ha Na and Debby Susanto.

Phuangphuapet offered creative dropshot angles which the Indonesians didn’t always see coming. While the Thai often read their play, he struggled to find the launch speed required of mixed doubles at this level to capitalise on it. Overall, not bad for a pair back from retirement as well as competing not in their main specialisation of level doubles where they’ve either won or been runner-up at Superseries. (In this discipline, Poon has been a runner-up at International Challenge, and Phuangphuapet has reached equally far in the draw at a Grand Prix Gold a decade ago and won a Super 100 title in 2018.)

It’s interesting to realise that this match would have passed without notice if it weren’t for the curiosity value of this odd mixed pair and their fresh Aussie adoption status. The current clues point to this being a one-off or at most a domestic fixture. Afterwards, Widjaja and Poon chatted like old friends at the warm-up/warm-down courts. 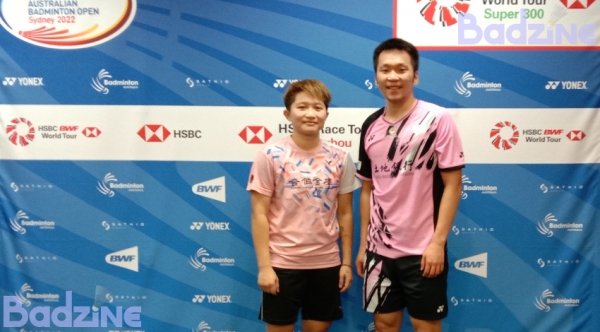 A tale of two Yangs

Lin/Lee led for most of the match until the tail end of the second game. At which point they easily summoned a burst of energy to push past world #58 Marsheilla Gischa Islami / Akbar Bintang Cahyono 21-10, 22-20.

On the other hand, their teammates Hu Ling Fang / Yang Po-Hsuan (pictured top) ranked 35th dug deep to oust world #29 Japanese Natsu Saito / Hiroki Midorikawa 17-21, 21-19, 21-12. The Chinese Taipei pair were one game down and behind 15-16 in the second before Yang forced the agenda with even heavier smashes followed by an extremely difficult save in the backhand corner on his partner’s side.

It was never a sure ploy but it was the only one the Chinese Taipei pair had left at the eleventh hour. Earlier Midorikawa was winning the flat exchanges as not being of tall stature he was finding these shots from his opponents easy to counter while Natsu Saito comfortably neutralised the ones aimed at her.

Once Hu/Yang levelled at one game apiece they started devising shots to make Midorikawa continually stretch on every return so much so he began to lose confidence in longer rallies from no longer making much of an impact. Naitsu/Midorikawa succumbed to under-hitting the shuttle as they gradually ran out of ideas to the pair who’d figured them out just in the nick of time.

December’s edition of Inside United is out now!