Skip to content
Alcaraz and Sinner Can Dominate Next Decade
Tennis

Alcaraz and Sinner Can Dominate Next Decade 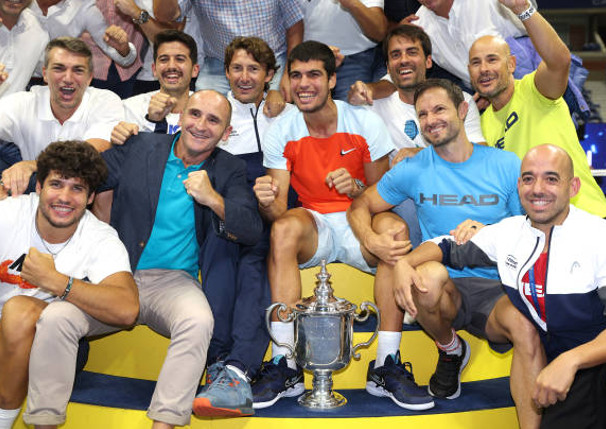 The 2022 US Open is the dawning of the Alcaraz Age, says Carlos Alcaraz’s coach Juan Carlos Ferrero.

A dynamic Alcaraz conquered Casper Ruud 6-4, 2-6, 7-6(1), 6-3 in tonight’s US Open final to capture his first Grand Slam championship and complete a riveting rise as the youngest man in the history of the ATP rankings to rise to world No. 1.

The victory comes 19 years after Juan Carlos Ferrero fell to Andy Roddick in the US Open final—and rose to world No. 1 the next day.

The 19-year-old Alcaraz saved a match point in his quarterfinal comeback win over 11th-seeded Jannik Sinner. Ferrero believes Alcaraz and Sinner will not only establish a rivalry to electrify the sport in the coming years they will combine to dominate for a decade.

“The other day I said to someone in the press that maybe Sinner and Carlos could dominate the tour for maybe the next 10 years, from what I saw, the level that I saw the other day,” Ferrero told the media after Alcaraz became the youngest men’s US Open champion since Pete Sampras in 1990. “Of course, there’s another players like Zverev, Thiem, Casper, Tsitsipas, they going to be there, they going to have opportunities to win Grand Slams for sure. But with all respect, that’s what I think.”


Alcaraz already owns one of the most complete games in the sport. His coach says Alcaraz has not yet scratched the surface of his full potential.

“As I tell him, I think he’s on 60% of his game,” Ferrer said. “He can improve a lot of things. He knows and I know that we have to keep working.

“Once to get to the No. 1, it’s not done and you go. You have to keep working, keep playing at a huge level on that tournaments to keep winning. He knows that and I know that. I’m going to be very close from him to remember him.”

Some opponents say the 19-year-old Spaniard already combines the best of the Big 3 in his all-court skill set. Ferrero has great expectations for Alcaraz.

“I have the goal to put him on the high level of tennis,” Ferrero said. “Of course, I think it’s going to be very, very difficult to achieve what they have done on tennis. We’re talking about 22 Grand Slams. He has only one. Is a long way still to go.

“But who knows? I think he has all the tennis and potential to be one of the best. All we have to do is try it.”

No Apologies – Tiafoe Not Sorry about Handing

Seeing RF Emotional Made Me Cry